Leadership Lessons from the Kentucky Derby 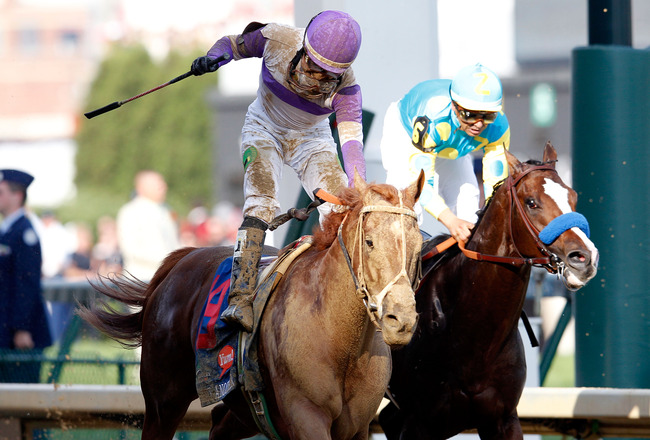 Rarely does the Run for the Roses at Churchill Downs disappoint.  And once again, this year’s 138th Kentucky Derby exceeded the betting crowd’s expectations. The much anticipated annual event, with a purse of more than $2.2 Million, provides the best two minutes of heart throbbing excitement that you can buy.  As the first race of the Triple Crown (followed by the Preakness in Maryland and Belmont Stakes in New York), the Kentucky Derby sets the standard of performance for some of the most prized and, may I say, oddly named three year old colts in the horsing racing world. Where else can you find a “Daddy Long Legs,” a “Sabercat” and a “Gemologist” vying for the same prize?

As I listened to commentators provide their “best winning” predictions, I sensed that this year’s Derby consisted of a crowded field of “Super Stars.” Each horse had their own “story.” Stories built around their pedigree profile, jockey’s riding experience and the owner’s illustrious history to horse racing.

The stage was set for high drama. Each horse galloped into the starting gates positioning themselves for their one and only opportunity to showcase their racing skills at the Kentucky Derby.  I, like many others in the crowd, could not wait to see which horse would have all the “right stuff” – timing, jockey handling, rail experience, etc., to win Saturday’s race. I began to wonder what will be the “tipping point” for determining which horse would win.

Although Bodemeister broke early and dominated the tracks, it was I’ll Have Another, ridden by jockey Mario Gutierrez that ran down the front runner to win the Kentucky Derby by 1 1/2 lengths. The Doug O’Neil training team, in addition to winning the nearly $1.5 Million purse, had managed to break several “firsts.”  It was the first victory for Doug O’Neil, and the first win at the Derby for a horse to win from the No. 19 position.

So what made the difference? Was the win by I’ll Have Another a result of mere luck?  Saturday, after all was Cinco de Mayo.  Or, could the win be the result of something more? Surprisingly, as I had time to reflect on the race, I determined that there were leadership lessons that could be learned from the 138th Kentucky Derby. Here are my thoughts.

First, by all accounts, I’ll Have Another did not fit the “physical profile” of other horses that were predicted to win the Derby. A quick visual of the other twenty competing horses suggests that there were more physically-suited colts. For example, one commentator noted that Union Rags, who was a 5:1 favorite, “looked spectacular physically and had grown into an imposing specimen.”  In addition, Union Rags had better betting odds than I’ll Have Another, since he came from a more impressive lineage and his owner came from a horse racing family. So given all of Union Rags’ stellar qualities, how do you explain the physically imposing Union Rag coming in seventh?

Leadership Reflection: Physical stature and pedigree was not determinative in I’ll Have Another’s victory.  Although his racing time may not have been impressive, he was able to find the stamina to close and to outrun the frontrunner, Bodemeister. Jockey Gutierrez described his horse as being a “steady competitor.”

In applying this analogy to business, I contend that an individual’s executive presence or family background may not be dispositive in predicting whether or not you will excel in your career.  Employers, across industries, are looking for individuals who not only “look” the part but, who more importantly, are also able to bring relevant experiences, business relationships and specialized knowledge to the organization. They are looking for individuals who, regardless of their background, have stamina and can close strong.

Second, commentators noted early on that the 25 year-old Gutierrez from Mexico lacked the successful track record of more accomplished jockeys, such as Calvin Borel.  Borel, who rode Take Charge Indy in Saturday’s race, after all, had won three Kentucky Derby titles in a four year span.  In contrast, Trainer Doug O’Neil and Owner, J. Paul Reddam happened to see Gutierrez ride in a South California race. Reddam noted that “I don’t know if he (Gutierrez) won or not, but he really looked good in the irons to me. We need to try some new blood.” Take Charge Indy finished nineteenth.

Leadership Reflection:  In positioning companies to engage in more strategic thinking and long-term problem solving, business leaders today are more willing to look at external candidates to fill vacant positions.  No longer does seniority rule. Organizations are aggressively looking for individuals who are bold and creative – who will provide the next “new big idea” or innovative solution.

Thus, if you are perceived by hiring managers as a talented “new blood,” like Mario Gutierrez, you may be given an opportunity to take on a business challenge that others believe you are not trained to resolve.  Simply stated, you may be given a chance to prove that you can add value to an organization.

Third, while owners and trainers of other horse competing in the Kentucky Derby may have viewed the Derby as another “business race event,” the team for I’ll Have Another embraced a different philosophy.  Owners of the Kentucky Derby winner noted that “the Doug O’Neil team is a lot of fun. The whole group tries to remember that racing is supposed to be fun first.”

Leadership Reflection:  Attitude and approach makes a difference.  Whether we are racing in the Kentucky Derby or implementing the next business strategy, the learning culture we create for our team is critical. It can make the difference between successfully achieving our business goals or failing.

The leadership team for I’ll Have Another fundamentally understood the importance of keeping the “business of horse racing” in perspective. They made it fun. As Dale Carnegie noted, “people rarely succeed, unless they have fun in what they are doing. “

I can only imagine that I’ll Have Another delivered outstanding results for Jockey Gutierrez and his owner because he entered the Derby gates feeling relaxed, confident, and ready to have “a little fun” in the Race for the Roses!

I am interested in your thoughts.  What kind of culture are you creating in your business environment?